A wet Saturday followed by a brighter Sunday 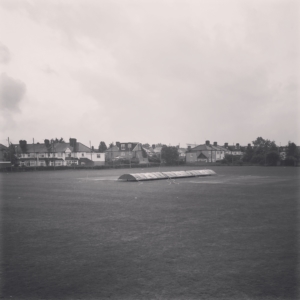 There was disappointment all round on Saturday as three of our four fixtures fell foul of the weather.

After an opening weekend win over Epsom CC last week, the First XI were keen to build on their early season form. Winning the toss and electing to field first, they didn’t take long to justify captain Cooper’s decision. Churt CC were reduced to 50-4 before the rain came with the wickets shared between a run-out (Trimmings), Cooper (2) and Bryan (1). Despite the best efforts of the Ruts players to get back out, the rain didn’t relent and both sides went away with 4 points. The First XI are at home to Purley CC this weekend.

The Second XI were looking to bounce back against Walton-on-Thames CC on Saturday and made a positive start before once again, the rain brought a halt to proceedings. After an initial half hour delay due to missing match balls, two early wickets from Chick and Fraser Trimmings left WoT in trouble at 23-2 after 10 overs. Unfortunately, the drizzle set in and after an early tea, a decision was made to call it a day. The Second XI are away to Sutton CC this weekend.

The rain didn’t spare the Third XI’s fixture against Normandy CC either. Put into bat, the Ruts reached 140-6 with newbie Kelly and oldie Chandler at the crease and looking to push on when the rain became too heavy to continue. The Third XI are away to Oxted & Limpsfield CC this weekend.

The Fourth XI hosted Normandy CC on Saturday and despite the rain managed to complete their fixture. Unfortunately for captain Slatford and his men, the result didn’t go their way as they came up short with Normandy winning by 5 wickets. Batting first, the Ruts reached 113-9 from 25 overs with Piper-Masha top scoring (33) however this wasn’t enough as Normandy reached their target in the 24th over of their reply. The Fourth XI are at home to Oxted & Limpsfield CC this weekend.

Sunday saw sunshine return to Poplar Road and the Ruts recorded their first victory of the weekend as they defeated Merstham CC by 25 runs in a fixture that was reduced to ‘friendly’ status after Merstham couldn’t field an eligible side with age restrictions in place. Ross Trimmings (89) top scored for the Ruts as they posted 157 with captain Patel (41) adding valuable runs. After a solid start from Merstham in reply, an excellent fightback saw the Ruts run out victors with young Elliot Saunders the pick of the bowlers with 3-20 from his 8 overs.

Training will be from 6:15pm at the club this Thursday and we’re looking forward to a less rain-affected set of fixtures this weekend. We’d love to see you at Poplar Road at some point to cheer on the boys!